Hawaiian Chef Tylun Pang and the Taste of Home 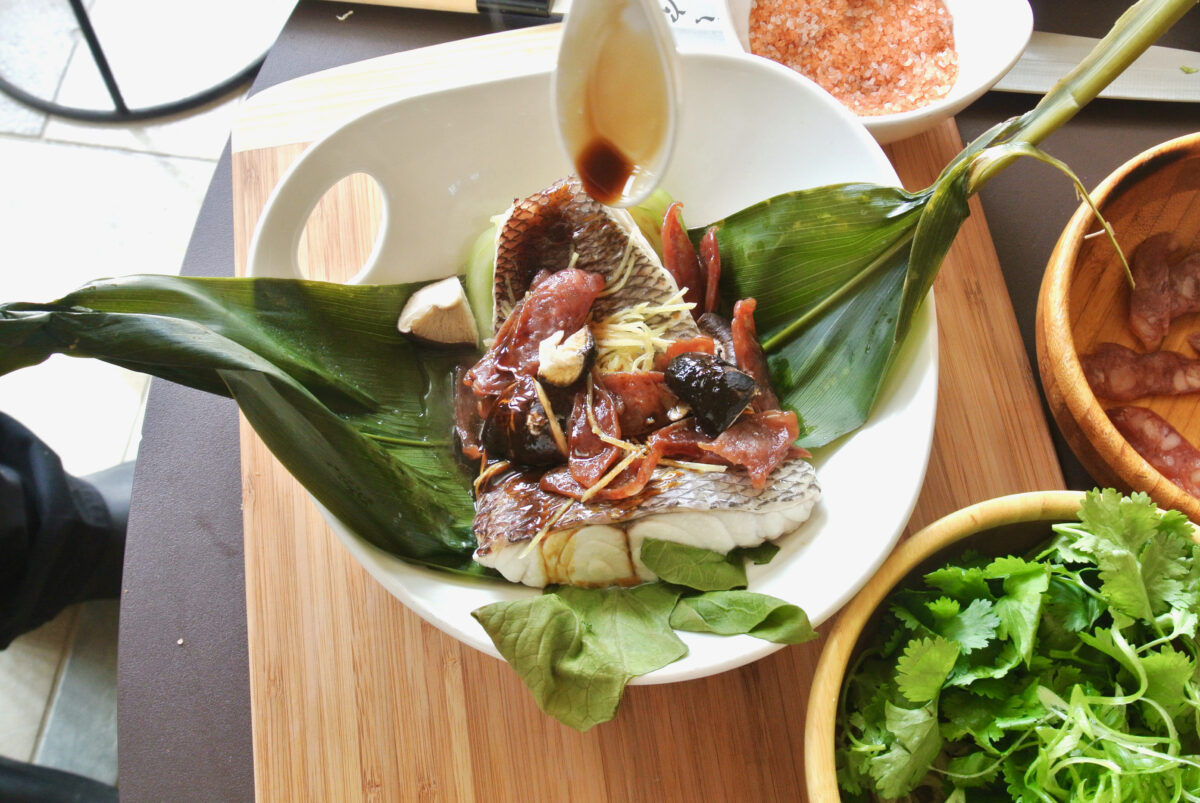 “If you don’t have a home, you at least have your culture and your food and no one can take that away from you.”

NOTE: This post was originally published years ago, when I first met Chef Pang, but I’m updating it here with this very sad note: Chef Tylun Pang, a dear and wonderful man passed away this year. Chef Pang was an incredible force for good in his community and much beloved by all who knew him. I got to know Chef Pang over the years and every time I’d visit, he’d always find time in his busy day running the kitchens at Ko to stop and drink something cold while sharing his love of food and people. There would always be some lovingly prepared dish he’d offer up. Sometimes it was the traditional lau lau (local pork or fish cooked with taro and wrapped in local ti leaves before steaming for six to eight hours.) Other times, he’d share a fresh steamer basket of his Chinese grandmother’s lobster dumplings. One afternoon, he called me out of the ocean to the morning breakfast area and brought with him steamer baskets and local snapper to show me one of his favorite dishes. After steaming the fish with Chinese sausage, mushroom, Hawaiian pink salt, and ginger, the fish gets topped with aromatics like fresh cilantro and green onion that sizzle and bloom under a steaming how drizzle of sesame oil.

Here’s a video; I recently had the honor of spending some time with him just after he celebrated his 65th birthday.

It took Hawaiian Chef Tylun Pang a journey around the world to understand that where he belonged was right where he started.  At the age of 15, Pang learned to cook, mostly by watching his father and father’s mother recreate their family’s Chinese recipes. At 18, he stepped out into the big wide world, working and traveling with Westin Hotels to South Korea, Tokyo, Hong Kong, as well as South America, with a final stint in Los Angeles before returning, 23 years later, to where he felt most at home, back in Hawaii.

As Executive Chef for the Fairmont Kea Lani on Maui, Pang was instrumental in the opening of Ko Restaurant. Formerly an Italian bistro, Pang and the execs at Fairmont decided the hotel restaurant needed an identity.

“Our biggest asset here is our people,” Chef emphasizes. Ko, inspired by Hawaiian word for sugar cane, features the culinary influences of the plantation era. “So, imagine,” Pang explains.  “Portuguese, Chinese, Japanese, German, Scottish, Scandinavian, Polish, Spanish, Puerto Rican, Korean, Filipino immigrants, and so many more, all moved to Hawaii to supplement the local workforce and really they became the foundation of what Maui is today.”

Immigrants, Pang continues, often make their favorite foods to remind them of home. “Koreans, for example” he says, “really wanted to hang on to their culture. Koreans felt abandoned. I was watching a documentary about Koreans coming to Hawaii to work on the plantations and even though it was a promised land, many could not go back home.”

Pang loves to delve into the influences of these cultures and reinterprets them through his (and his cooks’) personal experiences. “These are recipes from our ancestors that have and continue to evolve. For example, local Chinese fried rice is a little heavier, more heavily seasoned, more substantial… and some people say ‘this isn’t authentic’…well, this is our fried rice, our Maui grown fried rice.”

When you play with someone else’s food, it’s respectful to know where it came from first.  You can’t ever really duplicate it but you can respect it. Pang took his crew to the local Sugar Museum to better understand the history of immigrant cuisine, and to understand the evolution of the food.

“This food that made them feel at home,” according to Pang. “If you don’t have a home, you at least have your culture and your food and no one can take that away from you. More than anything, food is about giving and sharing and making people feel at home. That’s what I try to do at the restaurant, and make sure we anticipate what they might want. So the food here is abundant and there are options like fish, beef, chicken and vegetarian. Growing up, we always had this instilled in us: Even if it’s tight at home we always made people feel welcome and the food was abundant.  This is from my Asian culture so I do the same at Ko. Ko is an homage and a celebration to these people who lost their homes but never their culture or spirit.”

Q and A with Chef Tylun Pang:

What do you cook at home?

My Dad always made steamed fish with ginger and sizzling oil.  At my house for special occasions, I make that.  It’s in my book, What Maui Likes to Eat.

Oxtail soup. Noodle anything…and I never turn down a crispy French fry. I have four kids and that’s what Dads usually get.

In Oahu, shopping as a kid in Chinatown at the market, fresh fish and turtles on ice; it’s changed a lot but I still like to go there.  Traditionally it was common for paternal grandpa to have two wives.  When we were little no one told us the story but one grandma, who was elderly, sat in the rocking chair dressed in silk and she had tiny feet; she was The Lady of the House. My father’s mother, we called her A E Popo, was my Dad’s real mother and second “wife.”  We weren’t allowed to ask who she was.  But we knew she was the working Mom, doing the cooking and shopping.  I was closer to A E Popo.  My Dad learned how to cook from her and I learned from my Dad.  A E Popo made noodles, chicken feet soup, pig tail soup, a poor cuisine.  I crave it.  My kids run away when I cook these dishes from my childhood but I love it.  Lots of dumplings. Lot of rice dishes.  Fried rice.  We always made Kitchen Sink Fried Rice.  NOTE: Pang’s version includes Lap chong, vegetables like cabbage to spinach, kimchee, short grain Japanese cooked rice, soy sauce, oyster sauce, fish sauce, egg, scrambled or cooked on the side sunny side up.

FOR MORE ON CHEF PANG….

Koiso sushi :A master chef tucked away in Kihei

This site uses Akismet to reduce spam. Learn how your comment data is processed.

I Am Not Your Exotic: An Essay

Nigel Slater and a simple salad of dates and thunderstorm celery